We all love and know Dr. Panda apps for their kid-friendly and open play designs. Dr. Panda School by Dr. Panda Ltd is open and ready for students, so you’ll need to get registered and sign up for classes today (least they be filled already). Many kids who are beginning pre-school or kindergarten experience stress and anxiety from what to expect from a day at school. There are so many unfamiliar sights, sounds, and routines, and it’s easy to be on sensory overload in a matter of minutes. Dr. Panda School is an app that allows the preschool set to take a tour and play with many of

the activities and routines that they will encounter. The kids have total control in this app, and that includes adding as much as possible to the mix or playing a preferred activity for hours. It’s a genius layout – by giving kids a say in their play, they can learn what works and what doesn’t…in terms of where their thresholds and interests lie. So grab your backpack, get on the bus, and let’s go to school!

On opening, the gang is on the bus and enters into the school on their own accord. This is big girl/boy territory and is much more sophisticated than daycare. If you’re thinking that you already own Dr. Panda’s Daycare, so what is the difference? That difference is huge. The School has a much bigger range of items to explore, and it’s clear that the environment has demands on the child to be more independent and problem solve to discover the inner workings of the school rather than be reactive to environmental influences such as a bouncing ball. Very subtle, but all I can say is WOW! As an adult, it was interesting to watch kids play this app. The ones that already rode a bus to school were enraptured. They knew the routines, and where they were going to have the most fun – and made a beeline for it. The rooms to explore are:

Kids loved the easy play and discovery mode of this app and played until they were asked to share. All were spellbound and enjoyed the fact that they were in the know of all the routines. One of my guys, after a stressful day at school, actually seemed to settle and decompress as he played Dr. Panda School. It seemed to give him time to process and let go of the day’s worries. A TWA Pick! 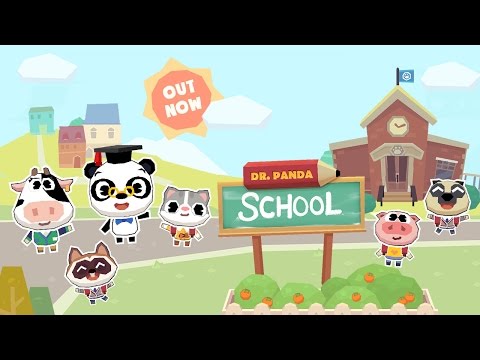 Jo Booth OTR/L has been an Occupational Therapist for over 35 years, and currently practices at EasterSeals of SEPA, Montgomery County Division mainly focusing on Early Intervention. It is an APS (Approved Private School) and home outreach based setting. She has also worked in Adolescent and Adult Rehabilitation. Writing reviews for Teachers With Apps have been a tremendous opportunity and experience to share and learn with others.

Jo Booth has been an Occupational Therapist for over 30 years and currently works in Pediatrics with early intervention. She sees kids newly diagnosed on the spectrum as well as medically fragile kids. She loves to move, explore and play every day; so that “her kids” grow up to be healthy independent learners.

View all posts by: Jo Booth