Economy and Education: How America is Falling Behind

Economy and Education: How America is Falling Behind

There is strong evidence that economic growth has been accompanied by growth in both spending and participation in schooling. Education of a Nation 1867: Federal Dept. of Education is formed 1870: First report by the new Education Department: • 7 million children enrolled in elementary school • 80,000 in secondary schools • 9,000 college degrees awarded. 1990: • 30 million enrolled in public elementary schools • 11 million enrolled in secondary schools. • Over 1.5 million bachelor’s and higher degrees were awarded. 2010 (latest figures, released in 2012): • 67 million enrolled in public elementary school • 24.7 million in secondary schools • 6.6 million in degree granting post-secondary schools In the second half of the 20th century: U.S. is the global leader in education, with the largest supply of highly qualified people in its adult labor force of any country in the world. FACT: As the U.S. population nearly doubled between 1950 and 2000, the labor force has also grown, from 62 million in 1950 to 149 million in 2005. This tremendous stock of highly educated human capital helped the United States to become the dominant economy in the world and to take advantage of the globalization and expansion of markets. But that lead has shrunk significantly over the past decade: Over the next 50 years: the labor force is projected to grow at about 0.6 percent per year as baby boomers retire. As a result, there are mounting concerns about the future growth of the U.S. economy. FACT: By 2018, 63 percent of U.S. jobs will require some form of post-secondary education or training. 41%: percentage of adults today who have a college degree in America. Falling Behind: Percentage of Population Achieving High School Graduation or Equivalent • Germany 100 % • Japan and Finland, more than 90 % • South Korea, about 90 % • Switzerland and the Slovak Republic, mid 80% • New Zealand, slightly above 70 % • U.S. 70 % • Portugal, Spain, Sweden, between 60-70 % THE GOOD NEWS: At the higher education level, the United States has a strong system that is admired around the world and is a world leader in research. MORE GOOD NEWS: The U.S. tied for first in University and college graduation rates. MORE GOOD NEWS: 18 of the top 20 universities in the world are in America. But…… NOT SUCH GOOD NEWS: by 2008, US ranked 15th among 29 countries with comparable data in number of educated students MORE NOT SUCH GOOD NEWS: the United States falls to 10th place in the rankings when it comes to the proportions of younger adults aged 25 to 34 who have an associate’s degree or higher REALLY NOT SUCH GOOD NEWS: Looking ahead to 2020, the U.S. proportion of that global talent pool will shrink even further as China and India, with their enormous populations, rapidly expand their secondary and higher education systems. FACT: If the U.S. high school graduation rate remains flat and China continues on its current path, China will be graduating a higher proportion of students from high school within a decade. 200 million: number of Chinese students in elementary and secondary education, compared with 66 million in the U.S. Students in Latvia, Chile, and Brazil are making gains in academics 3X faster than American students; while those in Portugal, Hong Kong, Germany, Poland, Liechtenstein, Slovenia, Colombia and Lithuania are improving at 2X the rate. Researchers estimate that gains made by students in those 11 countries equate to about two years of learning. Each additional year of schooling appears to raise earnings by about 10 percent in the United States. The Global Talent Pool is Shifting: The rise of Asia is one of the most critical developments of the late 20th and early 21st centuries. 1980 to 1990: Japan boomed, world-class companies like Sony, Honda, Toyota, and Nissan achieving great success in industries where the United States had once been dominant. China’s GDP tripled between 1980 and 2003, increasing from USD$12 trillion to USD$36 trillion, making it the world’s second-largest economy; it is expected to grow to USD $60 trillion by 2020 Educational trajectory: The shift in education Most of the top performers are in Asia. Shanghai and Hong Kong led the way, followed by Singapore, South Korea, and Japan. 82 million graduates: At the college level, according to the Chinese Ministry of Education, a small proportion of the population than the U.S., but still a number greater than America’s 31 million college graduates. FACT: China expanded the number of students in higher education from 6 million in 1998 to 31 million in 2010, going from almost 10 percent to about 24 percent of the age cohort. And many of these students are studying science and engineering. The pace of change in high school graduation in some countries has been astounding: Two generations ago: South Korea had a similar economic output to Mexico and ranked 24th in education among the current 30 Organization for Economic Co-operation and Development’s (OECD) countries. 93 %: Today, South Korea has the highest secondary school graduation rate in the world, with 93 percent of the secondary school-age population obtaining a high school diploma, compared with … 77%: in the United States. At the higher education level, the United States is lagging behind: Science. In science, U.S. students ranked 23rd among all nations and provinces taking a standardized test. Math. In math, the United States ranks 31st among all nations and entities taking the test. Reading. In reading, the United States ranks 14th Shanghai, China is #1 in all three categories When the average number of years of schooling in a country was higher, the economy grew at a higher annual rate over subsequent decades. Each additional year of average schooling in a country increased the average 40-year growth rate in GDP by about 0.37 percentage points. A country able to attain literacy scores 1% higher than the international average will achieve levels of labor productivity and GDP per capita that are 2.5 and 1.5% higher, respectively than those of other countries. Shift in the world’s economic giants: a Projection 2013: U.S. is the world’s top economy 2016: Year that China will surpass America as the world’s largest economy 2060: Year India will outstrip the American economy 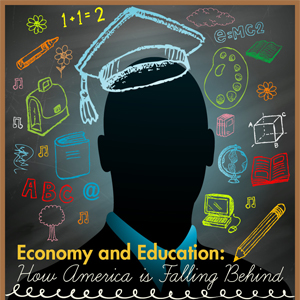