Phonic Flashcards & i Can Spell with Phonics

Phonic Flashcards and i Can Spell with Phonics by Michael Harvey & Cherie Faulkner are two apps that you can tell right off that they have been made by professionals who understand reading readiness! These two applications use an explicit learning system with a scope and sequence where the tasks are clearly outlined with what the learning goals are for the student. Instruction begins with the preparation of the learning the letters (graphemes) with their associated sounds (phonemes), then explicit phonics teaches blending and building, starting with blending the sounds into chunks and then into words. Explicit and systematic instruction in foundational literacy skills helps children learn to read, and there is a body of research supporting  this. Both of these apps are structured so that a specific skill can be honed in on and then have the option to mix things up. Repetitive practice leads to mastery when the why is explained.

Phonic Flashcards contains interactive cards with pictures representing the word, you can then tap on to hear a sound associated with individual letters. A choice is given to either have the words voiced, sounded-out, or both, Also, in the easy to use settings you can adjust what the child hears and sees on the screen. The app also lets you hide the picture to administer a reading test. Quite simply a child starts with the sounds of the alphabet, then on to forming 3 letter consonant vowel consonant words with the short vowel sounds. As the levels progress 4-5 letter words are introduced with diagraphs and blends. Higher levels explore the double vowel sounds, and progress through what are known as "r" controlled vowels and levels up to letters making more complex sounds like oi, oy, ow, and aw . BEST PART: the developers included all the wordlists lists HERE and a PDF GUIDE with guidelines “How to teach your child to read using Phonic Flashcards”. This is a real boon to parents and teachers!

NEWS FLASH: Just released FREE "lite CVC" version of Phonic Flashcards. The lite version, which includes 41 CVC words, enables teachers to try out all the activities for free. Phonic Flashcards lite CVC
Also, get a set of FREE worksheets to complement the apps teaching of short vowel sounds. These can be downloaded here: http://www.phonicflashcards.com/worksheets.htm

i Can Spell With Phonics  helps children learn phonics at the same time as learning to read and spell 150 commonly used words. Spelling words are taught in meaningful context, but are also broken into “chunks” and sounded out when possible. Beginning with 2 letter words, such as go, us, and is, and onto the  3 letter consonant vowel consonant words with the short vowel sounds. Then moving on to common digraphs and consonant blends leveling up to double vowels words and more complex letter combinations. The iCanSpell app has an accessible interface with minimal background noise to promote the visual concentration on the letters and sounds. There are three different choices of English: American, English, and Australian, I can vouch for the American English being properly and professionally articulated. Not always an easy task when making apps. 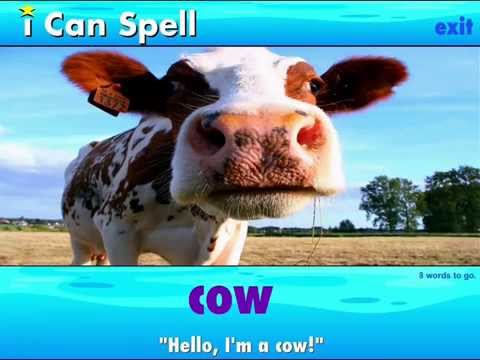 TO PLAY… All you need to know is how to ‘tap’ - and how to ‘drag’, then pick one of the five words to start (from easy to hard). Each 10-word-lesson is made up of four activities: Yes, spelling is still an important skill that children need to master, nothing worse than submitting a resume with a mix up with one of the to, two, or too's! According to the developers:  It’s like training wheels for spelling success! Their belief is that to be effective, spelling software must explicitly teach the skills and strategies that good spellers use. It must be sensitive to the needs of poor spellers, and it must be PLAYABLE in order to deliver the additional practice that some students need in order to become successful spellers. Stay tuned, Apps4Spelling is updating their apps as well as developing new ones.