Should Computer Games Be Used for Classroom Instruction? 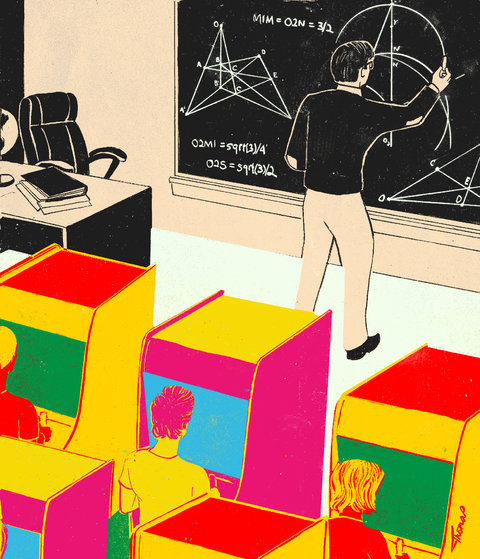 Should Computer Games Be Used for Classroom Instruction? By PAMELA PAUL
When I was a child, I liked to play video games. On my brother’s Atari, I played Night Driver. On his Apple II, I played Microwave, Aztec and Taipan! When I got to go to the arcade, I played Asteroids and Space Invaders.
Here’s what I learned: At a certain level on Microwave, the music from the bar scene in Star Wars comes on. If I am at the front line when aliens descend to Earth, we’ll all be in trouble. Also, dealing opium in the South China Sea is more lucrative than trading in commodities.
In short, I didn’t learn much of anything. My parents didn’t expect me to. I just had fun. Today, educational technology boosters believe computer games (the classroom euphemism for video games) should be part of classroom lessons at increasingly early ages. The optimistic theory is that students wearied by the old pencil-and-paper routine will become newly enchanted with phonemic awareness when letters dressed as farm animals dance on a screen. Last week, GlassLab (Games, Learning and Assessment Lab) unveiled an online resource for teachers based on the role-playing game SimCity, and this fall it plans to release a version of the game specifically for classrooms. According to its Web site, GlassLab’s mission, in part, is to show that “digital games with a strong simulation component may be effective learning environments.” At the new PlayMaker school in Los Angeles, financed in part by the Gates Foundation, a gaming curriculum includes adventure quests and other educational game apps. A 2012 report by the New Media Consortium identified “game-based learning” as one of the major trends affecting education in the next five years. Meanwhile, many parents believe that games children play on home computers should edify children, improve their hand-eye coordination and inculcate higher math skills. The most popular apps in the Apple store for toddlers and preschoolers are educational. Even parents who scoff at the idea of toddlers learning from Dora gleefully boast about their 2-year-olds’ having mastered basic math on Mommy’s phone. The concepts of work and play have become farcically reversed: schoolwork is meant to be superfun; play, like homework, is meant to teach. There’s an underlying fear that if we don’t add interactive elements to lower school curriculums, children won’t be able to handle fractions or develop scientific hypotheses — concepts children learned quite well in school before television. In a 2012 survey of elementary and middle school teachers by Common Sense Media, 71 percent of teachers say entertainment media use has hurt students’ attention spans “a lot” or “somewhat.” The findings have had no apparent effect on palpable enthusiasm for interactive teaching. When experienced teachers express skepticism about the value of computer games in school, they’re often viewed as foot-draggers or change-resistant Luddites. A 2012 Project Tomorrow report (paid for in part by the technology industry), found that only 17 percent of current teachers believe technology helps students deeply explore their own ideas. READ full article here: