When Sydney Smoot, a fourth grader at an elementary school in Florida, took a stance against standardized testing in front of the school board - you could hear a pin drop. The impetus for the speech, “What inspired me to speak all started one day when I came home. My mom asked me how the testing went, and I told her I was told not to speak about the test to anyone. I had not felt comfortable signing something in the test." She went on to expound on how she feels that she should be able to discuss anything about school and her education with her parents and felt troubled to be told not to discuss the test with anyone and then sign off on it. Sydney eloquently stated, "This testing looks at me as a number. One test defines me as either a failure or a success through a numbered rubric. One test at the end of the year that the teacher or myself will not even see the grade until after the school year is already over.  I do not feel that all this FSA testing is accurate to tell how successful I am. It doesn’t take into account all of my knowledge and abilities, just a small percentage." 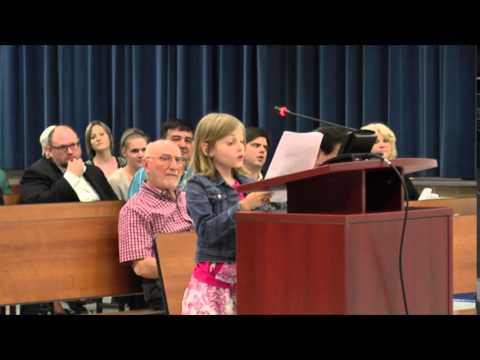 Way to go Sydney! I have been writing and about this topic for years and trying to discuss the disparity of forcing special needs students to take the same assessment as their grade level peers. It had always fallen on deaf ears. The way in which the Common Core was implemented along with the overzealous thrust for standardized testing is what pushed me out the door. Finally, it is the parents and students whose voices are being acknowledged by the system, kudos to you! There might be hope for the future of education in America.