Teachers Surveyed on Using Games in the Classroom

Yesterday an email containing this survey came across my desk. Of course, I was interested, digital gaming is my life. Great news hearing that teachers are putting more value in the use of digital games in the classroom, although I was disappointed to read about the barriers teachers still face. I wanted to share and hope you find it a worthwhile read. Just wish I could have been part of the survey since my students are exposed to an iPad and learning games daily.  You may want to know that this survey was designed by the distinguished Joan Ganz Cooney Center reported by. A BIG shout out to Mark Schlichting, the super talented developer from Noodle works, and many other digital endeavors, thanks for sending this information my way!
Although technology in the classroom is evolving from computers to tablets, a new survey from the Games and Learning Publishing Council highlights that the use of games in the classroom is becoming more common and teachers are increasingly valuing the ability games have to motivate low-performing students. The results are an initial look at a far larger analysis of the state of games in the classroom that will be released in late summer 2014. 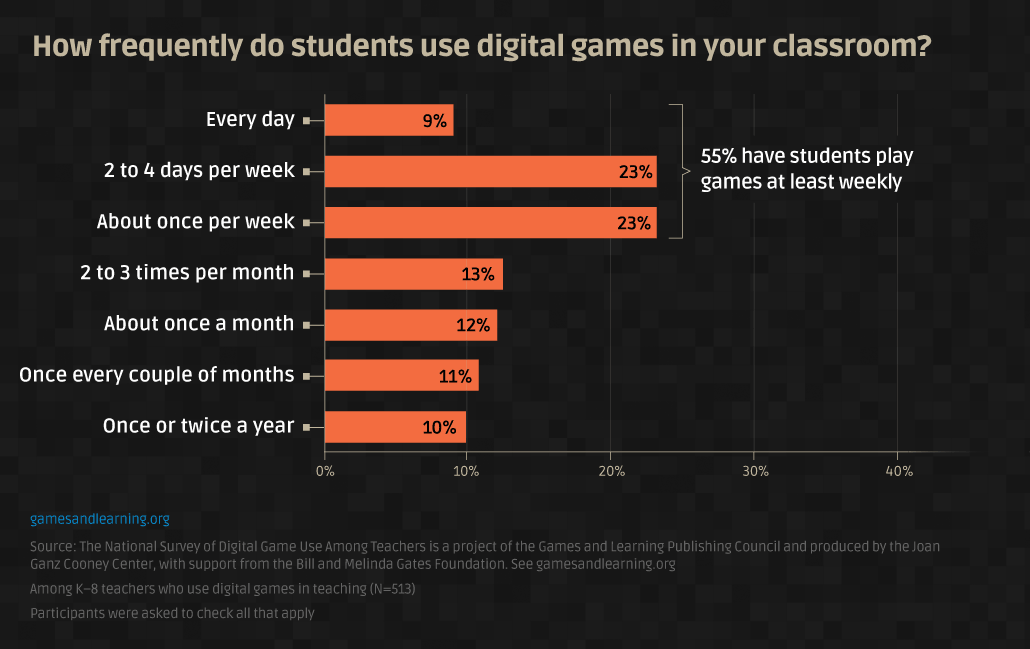 Games in the Classroom

We’ve learned that if you provide teachers a place to find quality learning games, games that engage and challenge students, tie directly into their curriculum, and play on the prevailing classroom devices within the boundaries of their lesson period – you will be literally overwhelmed with the response.

Din Heiman, BrainPOP (home of GameUp) The state of technology and the way games are used by teachers appears to be evolving quickly. Use of tablets, while still not the primary tool for playing games in the classroom, continues to grow. The GLPC survey found that a majority of teachers still use desktop computers to play games (72%) and a sizable group (41%) is using interactive whiteboards. But still, tablets have quickly grown to equal the whiteboard usage. This growth of mobile technology was also highlighted in a new survey from the technology and education firm Amplify. That survey found that of those not using tablets 67 percent plan to invest in them in the next 1-2 years. “Mobile technology now has a substantial presence in most school districts,” the Amplify research report found. “2014 continued the trend of steady growth in mobile technology adoption, with additional growth very likely in the next two years.” It is also worth noting that there is no single way in which teachers have students play games in the classroom. As many have students play games individually (30%) as have them play with another classmate or in small groups up to five (34%). Notably fewer teachers (only 17%) have lessons where students play as a class. For designers, this means they should keep in mind the continued presence of desktop computers as well as the varied way in which teachers have students play in the classroom.

It is clear that digital games are becoming commonplace in the classroom. Teachers understand that games provide another instructional tool that’s not only engaging, but also simulates contextualized, or hands on, learning experience. The survey also confirms what I see every day: enthusiastic teachers are excited to transform school with creative implementations of edtech tools but they lack the resources and support they need to do so.

Jordan Shapiro, author of a Mindshift series on games and education. 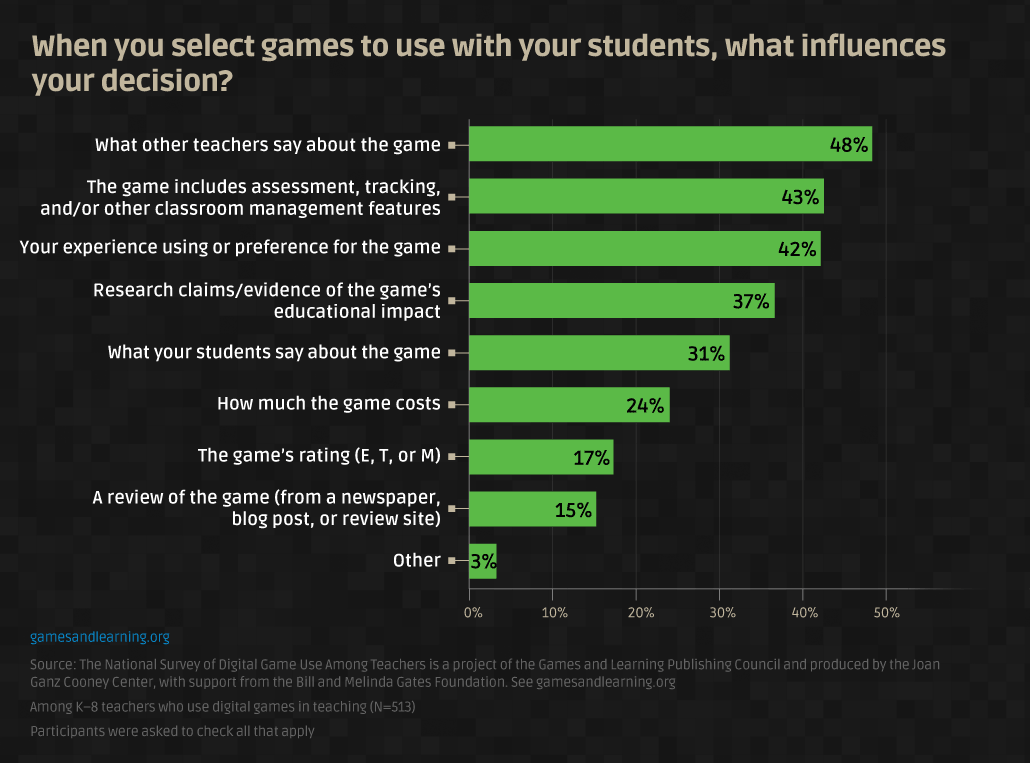 Finding the right game for their class continues to be many teachers’ first complaint about trying to find games to use with their students. That said, designers can take a few points of reference from the GLPC study. First, anecdotal feedback continues to be a powerful driver of how teachers choose games. Between recommendations from teachers (48%), their own experience with the game (41%) and feedback from students (31%), many of the things that influence teachers’ selections amount to word of mouth. Still there are other factors that clearly help certain games rise above the pack, including tracking data about student performance or allowing the teacher to manage the class use of the game (43%) and evidence that the game is effective (37%). Perhaps surprisingly only 15 percent of teachers noted the reviews the game received and only a quarter cited the cost of the games as factors that influenced their decisions to use a game in the classroom. 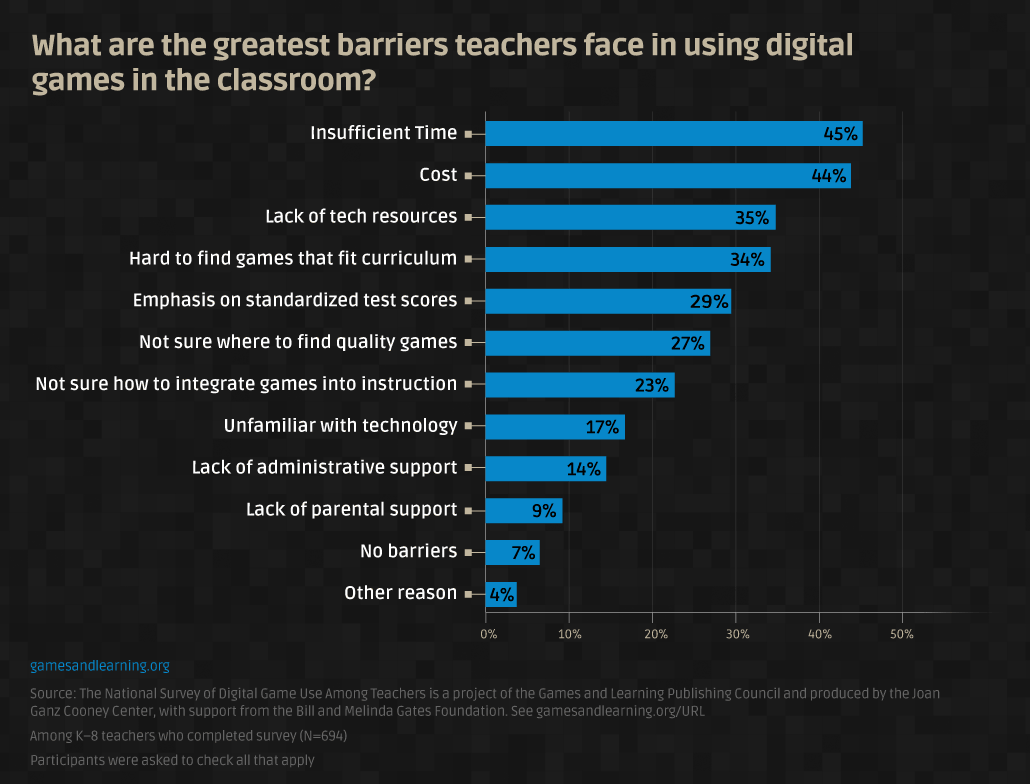 Understanding what keeps a teacher from utilizing games is one of the critical challenges facing game developers seeking to sell their games in school. According to the teachers surveyed, the time it takes to implement games (45%) and the cost (44%) are the primary barriers to implementing games in the classroom. Google and Apple have both sought to address this issue of the time it takes and the difficulty one encounters trying to find a game that addresses the correct course requirements. Rick Borovoy, product lead for the Google Play for Education, said, “For that curated section we pretty much inverted the normal app process. Instead of making it easy to submit and hard to get discovered, let’s make it a little bit harder to submit; let’s make it that you really have to be above an educational bar and then we will make it easier to be discovered.” But as challenging as the marketplace and the issue of findability is, it’s also worth noting that very few teachers cited opposition to the use of games from administrators (14%) or parents (9%).
One of the reasons that we may be seeing a more regular use of games in the classroom could be found in what teachers had to say about the benefits and impacts of using games. In particular, teachers said the use of games can have a huge benefit for those students who have struggled in regular school situations and tests. Nearly half (47%) of teachers said it was low-performing students who benefited most from the use of games. This stat was almost mirrored in what qualities teachers most valued in games. More than half (55%) said that the ability of games to motivate struggling students and those special education students was one of the two key values they found in games. Perhaps one of the more interesting things to note is when asked who benefits from the use of games one of the lowest scores from the teachers was the best students. Only 15 percent said high-performing students most benefited from the games, but it should be kept in mind 30 percent said all students benefited equally. READ THE FULL SURVEY HERE:

This survey was designed by the Joan Ganz Cooney Center and was fielded during a three-week period in Fall 2013 by VeraQuest, who recruited respondents from the uSamp online survey panel. The panel has over 2 million members in the U.S. who have been recruited through a number of different panel enrollment campaigns, and panelists are required to double opt-in to ensure voluntary participation in the surveys they are invited to complete. Adult respondents were randomly selected from a targeted uSamp panel of k-8 classroom teachers to be generally proportional of the demographic strata of total U.S. teachers. Once selected, respondents were invited to a protected web-based survey which ensured that only the intended recipient could complete the survey, which could be completed only once. There were 694 respondents from the U.S. who reported being classroom/specialist k-8 teachers who completed the survey. Statistical testing completed at 90% confidence level where appropriate. In some instances, percentages may not add to 100% due to rounding. Gamesandlearning.org is a news and information service aimed at increasing the amount of information available for those interested in developing and funding new educational games for children and young adults.